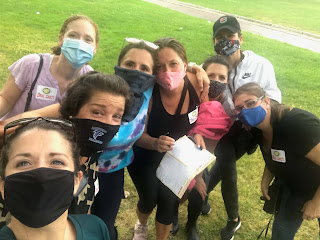 When creating an outdoor scavenger hunt you are not looking to creating an amazing race. You are looking to create clues that are easy and non-dangerous: (such as climbing, crawling, or driving). You want to make the game be within a tight radius such as downtown area and keep it clearly on foot. You also have to take the precautionary measures because of COVID-19 and keep the game as outdoors as possible. Completely refrain the players from entering any type of establishment. Also it is very important that social distancing is at play throughout the whole Game experience and that all players should have masks on. Once you have that covered well you're off to the races :-)

When creating an outdoor scavenger hunt it is mostly derived by photo submissions in the most basic form of a scavenger hunt. There are premium scavenger hunts such as ours that provide many many different challenges to make it into a unique game experience. But right now you just want to create the fundamentals and those are photos and trivia. If down the road you decide to do another scavenger hunt for friends or family then you can start creating additional non-related challenges.

Take a notebook and head to your downtown area start looking around: look up, look down, look left, look right you will definitely start noticing things that you probably have never noticed. Such as Street awning, public art, a statue, a plaque, and so much more. At that point everything that you see, include it into your scavenger hunt list. That is what I call location Photo challenges. Now let's just say that your downtown area with all due respect, does not offer too much. Well, at that point go to a downtown city environment and I am sure that you will find many things to implement into your location photo portion of your game. The other type of photo challenge that you should implement in your game are just fun action shots. Those examples can be many, such as a team pyramid, forming a word, acting out a scene from a movie, etc. If you can't come up with ideas at that point for action shots just go online and I'm sure you'll get ideas especially on platforms like TickTock.

The last thing you should implement in your outdoor scavenger hunt is implementing trivia scavenger hunt clues and treasure hunt ideas. As far as trivia do not implement anything that you could simply find on Google. Make it a little more challenging where they actually have to visit that location in the trivia. A great example of that would be how many bulbs are within an outdoor sign. Or how many flags are outside of a particular hotel. Once you start with one trivia question and keep on looking around you'll have 10 trivia clue questions within 30 minutes for sure.. As far as treasure hunt clues that can be endless, you can have them get anything from a postcard, comic book, bouncy ball, stamp, four leaf clover, whatever you want it's pretty simple.

As far as length of game and point structure, it all depends how big of a radius did you create while you were scouting the area. I would say nothing less than 60 minutes and nothing more than two hours. As far as scoring you can have it be whatever you want to be but keep it simple for example action photographs 25 points location photographs 50 points trivia 75 points and anything returned back to you from the treasure hunt 100 points. By keeping the point structure that simple it makes your tabulating in the end very quick.

Remember the indoor scavenger hunt clues should not be anything in the form of dangerous such as jumping, swimming, climbing, keep their feet on the ground. An indoor scavenger hunt is usually nowadays conducted via zoom, not a big fan of it because it looks a bit non-personal, but for the short term it works. The items that can be on your virtual remote indoor scavenger hunt can be anything like an indoor treasure hunt finding for example a game board, a Rubiks cube, a Dictionary and locating the word scavenger hunt in it, a stuffed animal, you kind of get the jest. Now how that is done is very easy, the game coordinator that would be (you) would have created the list and sent it to the players prior to the start of the game. Once you set the time of the game, (keep it no more than 60 minutes),  have everybody that is participating in the zoom call 10 minutes prior for instructions. When the game begins, I highly recommend that they have zoom on their cell phones tablets because it's going to require a lot of movement inside and maybe outside of their home so lugging around a laptop would not make it ideal.

When it comes to submission to their photo / video challenges they would simply show it on the screen and you would be monitoring the whole game and tabulating in real time. By doing that it will make the end results very quick with instant gratification. The other thing to include into your indoor scavenger hunt is implementing a few videos. What type of videos you may be asking, simple non-dangerous videos. Such as a dance for 10 seconds or reenacting a scene from a movie. If you want some inspiration like I said with the outdoor scavenger hunt clue ideas above...Instagram and TickTock are not too far from your reach. In conclusion as I said above for the outdoor scavenger hunt keep in mind who your players are. If they're adults that's one thing if they are kids that's obviously another.

So I hope that gives you a little insight on how to attain some indoor and outdoor scavenger hunt clues.  If you want to learn more about our premium scavenger hunt that we have offered now for the past 20 years feel free and log onto  cashunt.com. Have Fun!