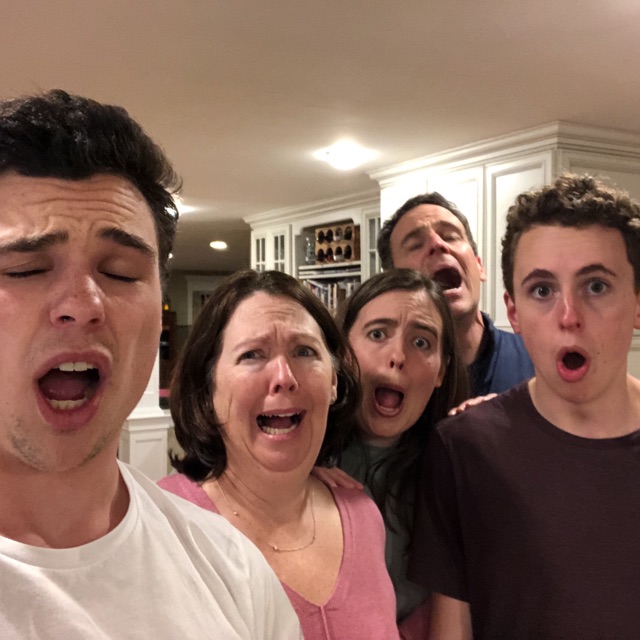 Games aren't always for kids they're also for adults, and sometimes when your are trying to figure a cool game idea, especially if the weather is not that great outside. So I'm gonna provide you with what I think are five simple, comedic, and dare do I say competitive games that you can play at your next  party.

The Gear: printouts of 3 x 3 grid; one per player

So you think you know how a party is going to go? Well, now you can win points for your foresight. Give each guest a grid. Ask the players to fill in each square with a prediction for what will happen during the evening, these can be predictions for specific guests or just for general events. For example, a player might write "Jill will cover her mouth when she laughs," or "someone will try to raise the Venetian blind, end it will go crooked."

Tell the players to keep the grid handy but not visible to other players. Guests will circulate, make small talk, fix drinks, in short the evening goes on like a normal party. But when one of their predictions comes true, they should alert the group: "everyone? I predicted that Jean would comment that the cilantro just makes the salsa, and she just did!" And mark off the box. The first person to complete three in a row on his grid either horizontally, vertically, or diagonally wins the game.

Physical word hunt is a combination of an indoor scavenger hunt and an anagram activity. It's a great game to launch during the cocktail hour while you're getting the food on the table. It keeps guests moving and playing, rather than standing around, sweating the small talk.

Players 2 to 10, plus a non-playing host

For each gas, makes cards with his or her name on them. On each card, write one letter of a six letter word. Parentheses each gas gets a different word.) Hide the cards are on the house-inbox, under the food processor, behind the cotton balls, in your sock drawer.

When your guests arrive, set them loose to find the cards. They are looking for cards label with their names; once they found all six, they can assemble the word. If they find a card that is not theirs, they should return it to the spot undisturbed and tell no one.

The first person to find all six of her cards and assemble the six letter word there in Wins a small prize, like banana grams! A player may also win by guessing her word even before she finds all the letters.

The Gear: a ball, a tennis ball, a kickball. Even a rollerball of socks will do you don't want to break the lamps.

The game plan seat the players around the edges of a room. The youngest player begins the game as it. It tosses the ball to a guest and says a three letter word -say,dig-then immediately begins to count to five. Before it has reached five, the guest whom the ball was thrown must say three words, each one beginning with a different letter in the word called out by it.  If he succeeds he returns the ball to it. If he fails he tosses the ball to another guest.

Three words is non-competitive but should you so desired, you may illuminate players if they fail to see the three words in time the last player to be eliminated is the winner.

Jail is a game in which people scramble to get seats-but this time you're operating as a couple. This means that everywhere you go, your partner has to go to. So teamwork is a key here-just like in a marriage, you can't barge ahead without your partner's consent-and if your partner does Barge ahead, sometimes it's better to just follow without argument. She who hesitates is lost

Players at least six couples, plus a moderator

The gear: a chair for each person

Seat guests in pairs around the room, some with their backs to each other, some side-by-side. But one couple in the center and call those two chairs "jail."

Assign each couple a number. The moderator calls out three numbers say, one, two, and three, and those three couple scramble to change seats, while the couple in jail also tries to get into a pair of vacant seats. Couples my stay together, side-by-side, but not touching. If the moderators sees them separate more than a couple of feet, they will lose a point. The moderator's judgment on this is final. Couples who successfully change seats gain a point.

Play is to 10 points, or some other agreed-upon number

A kind of reverse hide and seek, sardines is a game in which one player, "it," must hide, and others hide with her when they find her. It's a great game for a post-dinner, had a few drinks kind of game.

Select an "It".  It chooses a hiding place sneaky enough to conceal her, but spacious enough to hold most if not all of the players. The seekers cover their eyes, count to 50, and then go in search of it. When a seeker finds it, he crawls into her hiding place with her. When seekers one by one discover it, they will cram into her space with her. The last one to find the crowd is "it" for the next game

House vs House is an indoor scavenger hunt game that is played through an app and scored in realtime.  The great thing about this game is you can challenge friends or family from their houses from the other side of the country.  This indoor scavenger hunt utilizes the inside and outside of your house. It's a combination of comical photographs and videos as well as personalize trivia and some secret challenges. The game is usually 90 minutes long, and it goes by fast. But what it develops is team building, improvising, and strategy. The best thing about it is you get to keep all the photographs and videos that you took throughout your game experience. So not only are you playing a game you're actually creating some unforgettable memories with your family and friends. To learn more about House versus House click here

Do you want us to host your game?

If so don't hesitate because we would be more than happy to provide a premium game experience and customize it you and your guests! click here to enter out site at cashunt.com